An FSU student reported Sunday Sept. 28 that sexual assaults were perpetrated against her this past weekend, both at an off-campus party Saturday night and also the following morning in an on-campus dorm.

A Campus Police bulletin first posted on Facebook Sept. 29 at about noon, and then around campus said, “The alleged perpetrators have been identified, interim suspended and restricted from campus while this matter is being investigated.” It added that there is no “ongoing threat” to students on campus.

Multiple media outlets, including The Boston Globe, reported that four FSU students are accused of the assault.

Because one assault allegedly happened off campus and one on campus, both the Framingham Police Department and FSU Campus Police are working “concurrently” on the investigation, according to Campus Police Officer Kristen Walls, who is a commonwealth certified sexual assault investigator.

Walls recommends students use the buddy system to stay safe, especially when going places that might be unfamiliar.

She added there are several ways for students to report incidents of sexual assault, depending on the student’s comfort level. Walls said some of those include “RAs, friends, us – there’s several officers here who are trained as sexual assault investigators – as well as Counseling Services, the town PD as well as MetroWest Medical Center. There’s several different resources around town as well as on campus that they could report it to.” 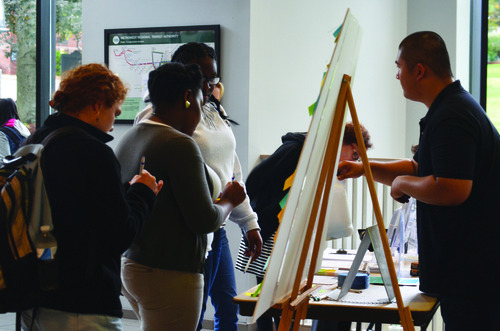 Dean of Students Melinda Stoops called a meeting on Tuesday morning to talk about ways in which the FSU community can react to this incident after being approached by a student who was concerned that she had heard a lot of “victim blaming” from her peers, Stoops said.

“There are a lot of misconceptions,” Stoops added. “It is often an acquaintance situation, where the victim knows the perpetrator, and people have a different reaction to that.”

She and the two students who attended the meeting brainstormed some events that would allow the community to “talk about this issue if they want to,” she said.

SGA President Kendall Valente was one of the students who attended the meeting. She said, “In the course of about an hour, we were able to get two conversations planned and we had an information table out that afternoon. … I was very impressed with the quick response by the dean, and everyone’s ability to drop what they were doing and respond, and [I am] proud to be a part of such a community.”

Two conversations were hosted at the Multicultural Center this week, and tables offering resources and information to students were set up in the lobby of the McCarthy Center.

She said FSU community members have been working on initiatives to raise awareness and increase student safety in regards to sexual assault. Including the launch of the SHAPE (Sexual Harassment and Assault Prevention and Education) website and bystander education training sessions called “Bringing in the Bystander.”

Glenn Cochran, director of Residence Life and student conduct, said Residence Life staff has been making an effort to raise awareness of resources for survivors of sexual assault, like posting information bulletin boards in all of the residence halls when they opened this fall.

“We target these themed boards for the opening month because there is research that identifies the beginning of the academic year as a higher risk period,” he said.

Undeclared freshman Jordan D’Elia said she thought the school “acted on it too late because if I was the person it happened to and saw them handing out the rape whistles after, I’d be upset.”

Daisia Stinson, a freshman biology major, said she would have wanted more information about the alleged incident, like where it happened.

Undeclared freshman Caitlin Tivnan said she thought the reaction from the news outlets was “too much. … My friend from another school said it happened there like three times and nothing happened. It makes our school look bad.”

Pierre Gerard, a junior environmental science major, said he has been hearing people gossiping about the reported sexual assaults.

He added that the fact that FSU is a dry campus makes him feel that the campus is safer. “Most sexual assault cases that I know about have involved alcohol.”

Yaw Boateng, a sophomore business marketing major, said that he hopes “everyone keeps an open mind. It could go either way. A lot of lives are on the line and no one knows the truth yet.”

Junior sociology major Steph Scanlon said she thinks FSU reacted “better than most schools.” She added that the police presence on campus makes her feel safer. “The school is doing what it can do. The rest is up to us students.”

Hey Seniors! It's time to submit your senior lette

Have a stellar weekend! 🌟

Seniors: Have you taken The Gatepost's senior surv

Have a lucky weekend!

Have a groovy weekend!

Happy Friday! Our Dec. 4 issue is available at the

Send us a photo of your favorite mask to be featur

Check out our amazing event next Monday, Nov 30. C