Approximatley 40 students and faculty welcomed and congratulated centenarian Kathleen Ryan Roberts, Class of 1937, and commended her many achievements throughout her life.

Dr. F. Javier Cevallos, president of FSU, said Roberts has an exceptional memory, and has been an active alumna for many years.

“[Roberts] has always been a very engaged alumni,” he said, adding “her mind is as sharp as a tack.”

Roberts discussed the beginning of her teaching career in a one-room school in the fall of 1937. She has taught in Milton, Vt. and South Dartmouth and Raynham, Mass., where she currently resides.

During her 48-year career she taught students throughout New England. Roberts served as principal in both the Dartmouth and Raynham Public School districts.

Roberts has immersed herself in the Massachusetts Teachers Association and the National Education Association both during and after her career. She was recognized last year for attending her 60th NEA national assembly. 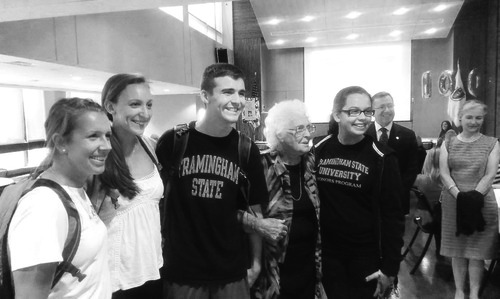 Mary Casey, director of alumni relations, who introduced Cevallos to those in attendance, said of Roberts, “[She is] one of the most, if not the most special alumna [of FSU].”

Roberts received an honorary FSU diploma in 2011 – the first diploma given out by Framingham State as a University.

Both the Red Sox and Celtics also honored her this past year for her 100th birthday.

The Kathleen Comiskey Roberts Scholarship, named after her, began in 1983, according to Eric Gustafson, the executive director of development and alumni relations. Students who have received the scholarship demonstrated outstanding leadership.

This years winner of the scholorship is SGA President Kendall Valente.

Gustafson said of Roberts, who is the oldest active alumna of FSU,  “For her to celebrate this with her framily is definitely important.”

Roberts said she appreciates the opportunities her education from FSU has afforded her.

“Education has given me a wonderful life. If you have a good education, you can go anywhere and be successful.”

She said she was on the National Board of Education when “The Cat in the Hat” was first created, and that she bought a “Cat in the Hat” outfit, which she has worn at events for the past 23 years.

She spent her entire career as an educator and has been nationally recognized for her efforts.

“It was interesting. You don’t meet too many people who live to be 100 years old,” said freshman food and nutrition major Kate Girardi.

“I found out [that Roberts was coming to FSU] at the Employment and Enjoyment Fair when I signed a card for her. I think it’s incredible she’s involved in the community at Framingham after all these years,” said Brian Leonard, a freshmen elementary education major.

The card Leonard referred to was Roberts’ life-size birthday card, which over 100 students signed.

“It is seldom that we meet someone that has lived such a productive and long life. It would take me 180 years to achieve what she has in only 100,” said Cevallos.

Happy Friday! Links in our bio 🌟

Some great information for students from the Healt

FSU is moving to remote learning! Look out for an

Thanks to an Op/Ed written by Staff Writer Mackenz

Happy Halloween from everyone at the Gatepost! We

Thank you to everyone for an amazing Engagement da

The staff on copy-edit night, hard at work to brin