This semester, the Multicultural Center is offering free school supplies to students on campus who may otherwise not be able to afford them in a donation-driven, no-questions-asked initiative.

Kathy Martinez, the center’s director, said the initiative took shape over the summer when administrators and staff from the counselling center were discussing the issue of students who face homelessness.

She said it may surprise many students to know that some of their classmates face this issue, but it is a problem that “becomes apparent in the summer when students don’t have a place to go,” Martinez said.

While the plan was to help students who faced this particular problem, Martinez explained that this drive is meant to benefit any students on campus who need assistance.

“Really, it could be any student. Students who are in a situation like homelessness, but also, I have a foundations class, and the students were telling me about how they spent like $800 on books. … If [you] had to wipe out [your] bank account with $800, you can’t buy a notebook.” 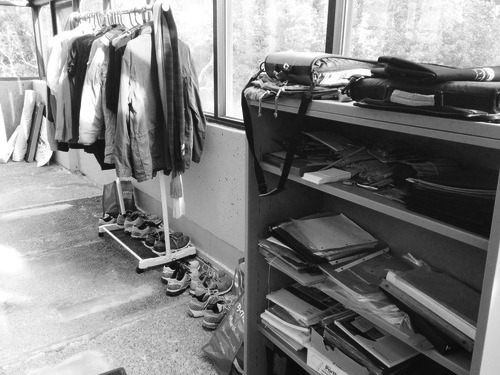 Martinez explained that coincidentally, Pride Alliance had been discussing holding a similar donation-based drive for students on campus who don’t identify with their biological gender and don’t have access to the clothing that reflects their identity. Clothing is now available among the stationary and backpacks donated to also benefit this group of students.

Kimberly Awiszio, president of Pride, said initially, the club’s idea had been to do a clothing swap, but Martinez suggested they broaden their initiative.

“This way, it’s still open for transgender students, but it’s not like an awkward thing,” Awiszio said. “We don’t have to ask any questions as to why they’re there or why they’re taking clothing. It can be for whatever they want, but it’s there if they need it.”

Gabriela Betances, a junior biochemistry major, said she donated a stack of paper to the drive. “It lifts the weight off your shoulders to know that whatever you don’t have or whatever you can’t cover, the school pretty much has you covered.”

Student Intern at the Center and junior communication arts major Cameron Zamagni said it’s a great way to “give back to the community … and letting people know that the Center is here and is a place for everyone.”

Martinez said people started donating to the cause immediately, often bringing brand new items, which “speaks volumes of our community.”

She said letting students know the drive is available has been the biggest challenge. It’s recommended that students take up to three items at a time, but Martinez said there are a lot of supplies still available.

Martinez said since it’s donations-driven, the project may not be sustainable, but she hopes the center will continue to offer resources for students.

She added, “You just never know what’s going on with someone next to you.”